Blockchain Capital’s Spencer Bogart, repeat his bullish position on Bitcoin, affirming he is definitely expecting for it to begin its race towards new highs. 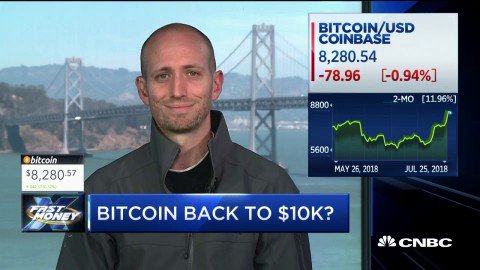 In an interview for CNBC’s Fast Money, Bogart explained his impressions of Bitcoin’s current situation in the crypto market. For the well-known businessman, Bitcoin has already experienced the 2018’s record lows, and for the rest of the year, a bullish trend is expected.

His comments show a more enthusiastic attitude compared to previous participation in which he has been more cautious:

“It’s Possible we’ve seen the lows, and I’m definitely expecting to see new highs, I mean, listen I think prior times I’ve been in the show I’ve said expect to see new lows before new highs… That low may already be in.”

Bitcoin’s current reality justifies the reasons for Mr. Bogart’s recent optimism. From his point of view, after a possible catalysts could start a Bitcoin price boom:

“Bitcoin is kind of a tinderbox right now, waiting for reasons to go higher; whether that’s global currency wars, trade wars, whether there is an ETF approval; I think any number of catalysts can send Bitcoin exploding higher.”

Although there has been speculation and analysis about a possible ETF approval in 2018, Mr. Bogart believes that this is much more likely to happen by 2019:

“My guess is sometime in 2019. I think the SEC is going to be thoughtful and take some time but… the cat is already out of the bag here.”

For Bogart, the conditions for ETF approval are becoming increasingly favorable. Not only from a legal perspective but also from an economic one. He says that there is already high exposure to blockchain technologes, and the adoption of cryptos is increasing.

Also, institutional investors are gaining exposure to cryptocurrencies too, which may increase regulators’ interest in approving crypto ETFs soon.

He commented that at the moment, the investments he finds most interesting are those of traditional equity startups. He told the staff at Fast Money that “We’ve found great opportunities there.”

As stated By Cryptocrimson.com, Bitcoin is on a bullish run. Technical Analysis confirm Mr. Bogart’s opinions. However, being a volatile market changes can happen quite unpredictably:

“There wasn’t much to chew on for bulls last week as market watchers were mostly focused on the SEC decision on the bitcoin ETF applications. Some of these were shelved for a later decision date while the application filed by the Winklevoss twins was denied again.

With that, investors are hoping to get more positive industry updates this week to see the climb sustained. Security troubles like hacking incidents might force a larger retreat but more signs of institutional interest from big names could be enough to spur more gains.”

Currently, Bitcoin is trading around 8.2k. The bullish run has increased its value after bottoming to historical lows of near 6k. During this week it has remained relatively stable within the 7.5 – 8.5k range.

ETF Issues Are Overhyped, According to Vitalik Buterin